← Magazine
Why regeneration is the most important topic
for organizational development

The Future of Work is regenerative | Text: Simon Berkler
For a long time, New Work has focused on important issues like leadership, relationships, or new organizational models. The next decade will be all about rolling up our sleeves and reconciling the economy with our planet.
Regenerative Business
Purpose

As economic actors, many of us have lived in a fictional world for decades. As a society, we have been under the comforting illusion that the economy is a self-contained system, where the free market can solve all challenges, to ensure progress and continuous development. Admittedly, people already began warning us of the dangers in the early 1970s, but - as is unfortunately often the case – they were dismissed for not having sufficient belief in the self-regulatory powers of the market.

The problem then, as now, was that "the Market" has never worked perfectly, simply because in practice the market can never take all relevant information into account, regardless of how crucial this might be. If we had factored natural resources (and the damage we cause to them) into price calculations from the outset, then market forces may well have been adequate. Public resources such as water and air have all too often been freely available to consume. Whereas public assets have become increasingly privatized, the ecological damage caused by private enterprise has impacted society as a whole. We have neglected these so-called “negative externalities” (a wonderfully technical term that hardly does justice to the monstrosity of its meaning) for too long; and now our negligence is striking back with full force. The Universe strikes back.

You want disruption?
Here you go!

What next? We’ve spent so long talking about sustainability, CSR and, more recently, ESGs, that ‘sustainability’ is actually no longer enough. Wait, what?! Well, unfortunately we’ve gone so far beyond our planetary boundaries that sustainable behavior i.e., "doing no further damage", can no longer keep us on the ‘2-degrees’ path – let alone below it.

We all know that we're running out of time.
We have just about a decade to halve our global CO2 emissions, and then another 15 years to drive them down to zero. It’s becoming ever more apparent to greater numbers of people that we’re increasingly facing challenges to our way of life and even to our survival. The impact for today's 50-year-olds or 70-year-olds will probably be minimal. But the lives of today’s 20-year-olds will certainly be disrupted, and the survival of those who are only just being born will be at risk.

In times of crisis, mankind has often shown that it can work together. Even though it currently feels like the opposite is true, we’re capable of this, if, and it’s a big if, many things come together at once. This means politicians establishing the right policy frameworks and tools; it means focusing innovation and development on positive impact; and it needs brave people taking the lead, even though they may seem completely crazy from traditional world views. It’s often those initially considered to be crazy, who are later recognized as the ones who made a positive difference.

It’s not a question of who’s to blame, nor is it about holding the private sector responsible for today’s situation and for tomorrow’s efforts to heal our planet. Each of us, whatever our field, needs to step up, shovels in hand (or watering can and seeds), ready to build a new world that is more regenerative, inclusive, and fair. The fact that over 200 companies have already signed the Climate Pledge, committing to “Net Zero Carbon” by 2040, i.e., well ahead of the timeline set out in the Paris Climate Agreement, shows that this re-orientation is already beginning in mainstream business circles.

It’s clear that this disruption will make great strides in the coming years – confirmed, not least, by the current political rhetoric anticipating the greatest transformation in our industrial history. This regenerative disruption will feel like the speed of sound for those who already felt that the digital and agile disruptions were fast. Once again, the buzzword ‘exponentiality’ is relevant here. If we are serious about achieving a more regenerative world in a decade or two (note: this isn’t in question), then already in 5 years’ time, companies will look significantly different than they do today. In other words: those who make bold steps in the right direction today, will be in a position five years from now to secure their survival – in this case, the survival of their organization.

What does ‘regenerative’
actually mean? 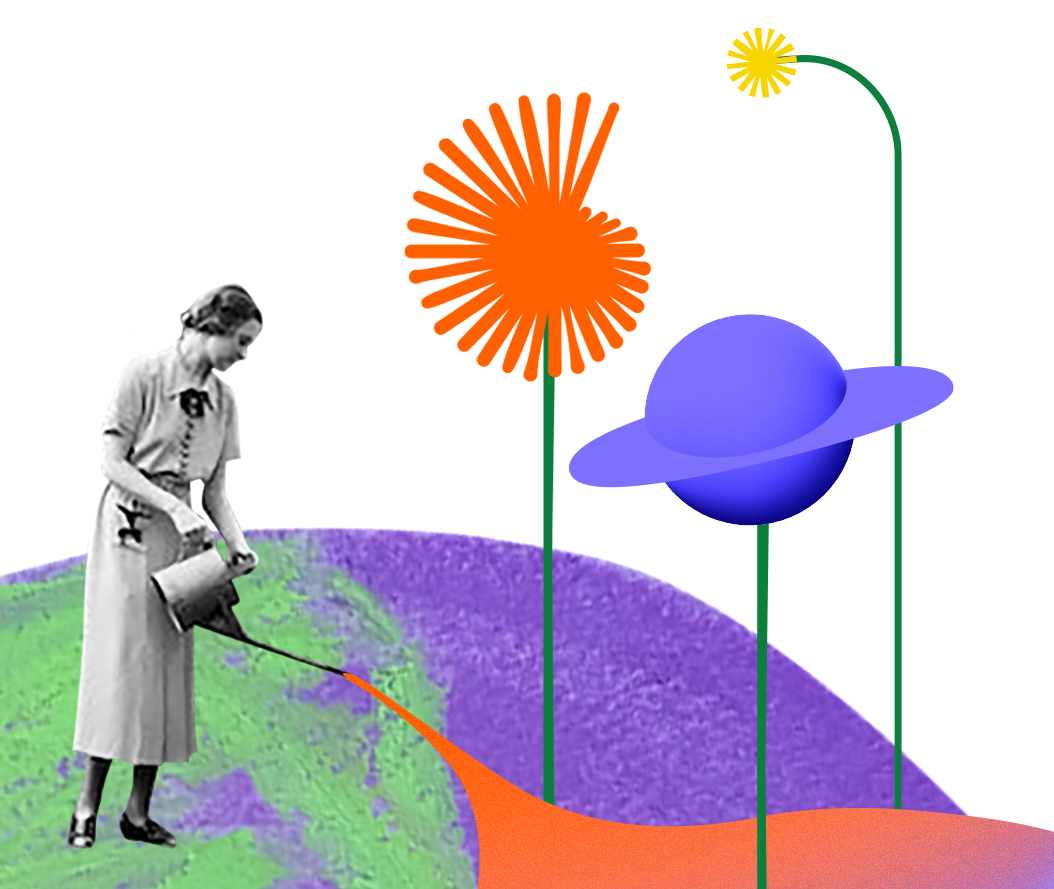 Humans are not alone on this planet. If you scale the 4.6 billion years of our earth's history to 46 years, we have only been around for about four hours. The industrial revolution (including modern economic history) began only one minute ago. And in the last 30 seconds, we have managed to destroy more than 50% of the natural resources available to us, partially irretrievably.

What’s becoming increasingly clear, in light of the advancing climate crisis, is that we humans depend on a healthy planet. Without planet earth, there are no humans. And without humans, there is no economy. In this order. Our economic system is embedded in wider ecological and social systems that are essential to our survival.

If we destroy these systems with our ways of doing business, it is no longer relevant whether GDP is growing or falling. It no longer matters whether we are still creating jobs. Because at some point in the future, the world where these jobs are supposed to be done, is no longer able to sustain the lives of those who are supposed to do the jobs.

Agreed, this sounds like a radical re-prioritization. And after so many decades obsessing about economic growth as a key indicator of success, this could seem somewhat counter-intuitive. But in the medium term, the only conceivable reason for companies to exist, will be to route commercial activities towards generating positive solutions, and contributing to the preservation, or indeed regeneration, of threatened eco-systems. 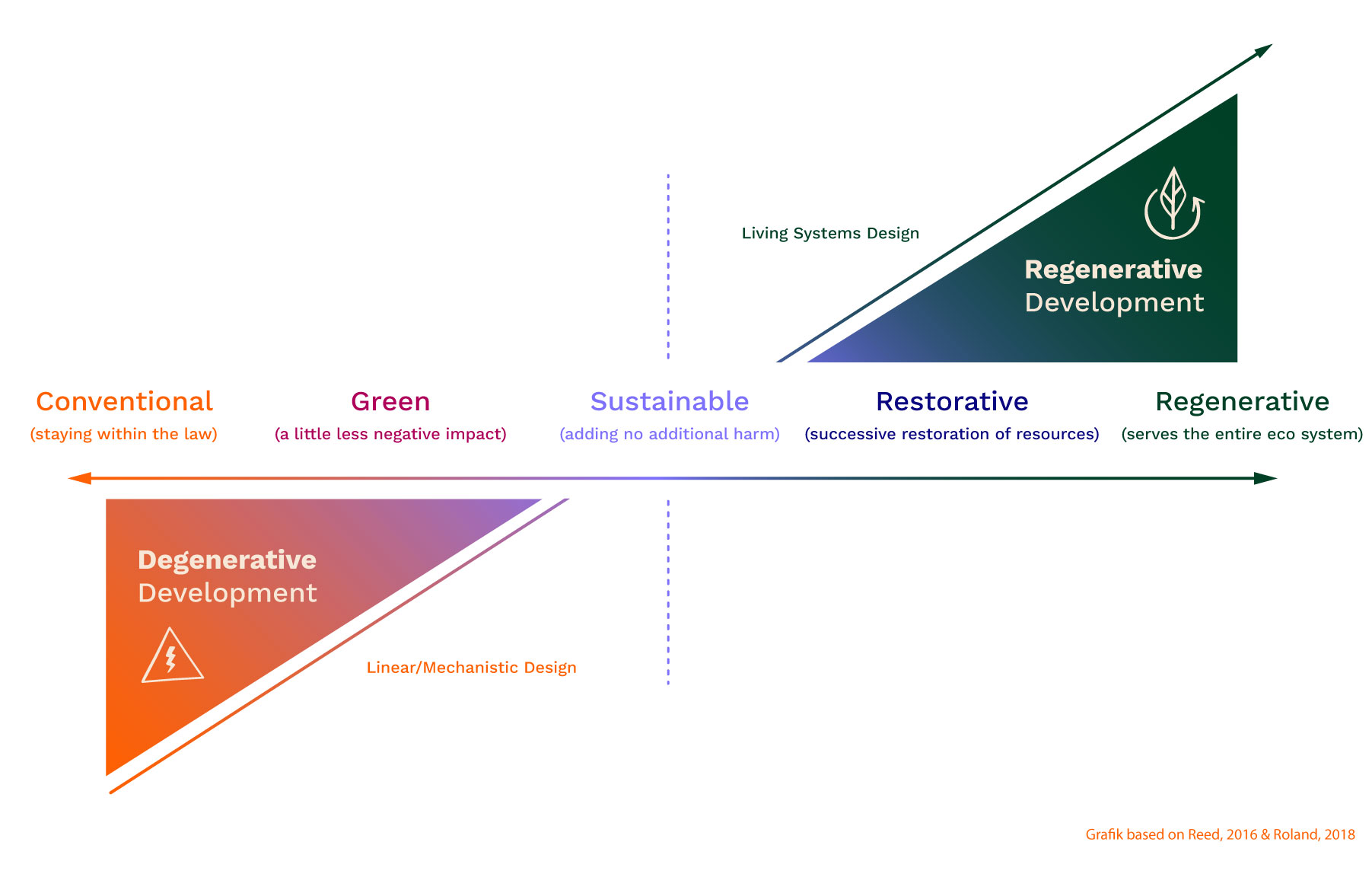 In this respect, a regenerative approach to business is nothing other than radical user-orientation – on the assumption, of course, that the users are interested in the survival of humanity. The difference between Human-Centered Design, as it is currently widely practiced, and a regenerative view of user-orientation (sometimes labelled “Beyond Human Centered Design” or “Planet Centered Design”) lies in systemic thinking and placing more emphasis on the long-term. Solutions that only meet users’ current needs today, but that in five, ten or twenty years become part of the problem rather than the solution, will come back to haunt the user (and also undermine the business model of the original solution provider).

If we were to calculate the drastically rising costs of socio-ecological crises in the coming years (both at the societal level and for each individual private company), together with the costs of inaction and of continuously changing regulatory frameworks, we would quickly come to the inescapable conclusion, purely on economic grounds, that there is no alternative than to embark on a serious transformation journey towards more regenerative economic practices. Some may accuse companies that are already arduously rebuilding themselves regeneratively of being crazy. But it will be these companies that are the most economically successful in future, precisely for this reason. It may initially feel like a redundant added investment. But with hindsight, it will be seen as an investment in self-preservation. And the only option that we truly have.

What does all of this have to do with
organizational development and New Work?

Back in the times, when we thought that “sustainable” would still be sufficient, organizations established separate departments for this purpose. They were labelled Sustainability Management, Corporate Social Responsibility or something similar. And of course, there is nothing wrong with that approach. The only problem is that the so-called ‘core’ business, let alone the entire organization, was rarely influenced by such siloed departments. But this is exactly what needs to happen now. When a building is burning down, it sadly doesn’t help to extinguish the flames in just one room and then to stop to congratulate yourself for having the fire under control. Many sustainability managers within such organizations are personally struggling with the organizational inertia and their own limited powers to make an impact, because many do these jobs out of a deep conviction to make a difference.

It is clear to most people what digital and agile are all about (though many organizations are still struggling to grasp them). Thankfully, we have moved on from the times when digitalization was considered a vertical function. And the companies that still live in those times can expect to face major transformation processes soon.

In many organizations, sustainability or regenerative management are still considered as pure strategy, reporting, communication, or CSR topics. Whilst none of this is wrong, it is simply an inadequate approach if those organizations want to (or need to) entirely transform themselves in a short amount of time. Such transformations require a concerted approach, with teams from all departments pitching in and taking ownership. At which point, we come full circle on many themes, like New Work or Future of Work, which have received significantly more attention in recent years. Undertakings of this scale can only fail with a “command and control” logic. Organizations that have started to reorganize leadership in recent years, to build more lateral structures, to become more agile, responsive and resilient, now have an advantage. In these organizations, the idea of ​​“everyone lending a hand within the scope of their capabilities and with a convincing purpose in mind “- as part of a clear and yet changeable process - falls on much more fertile ground (excellent, yet another regenerative metaphor!). 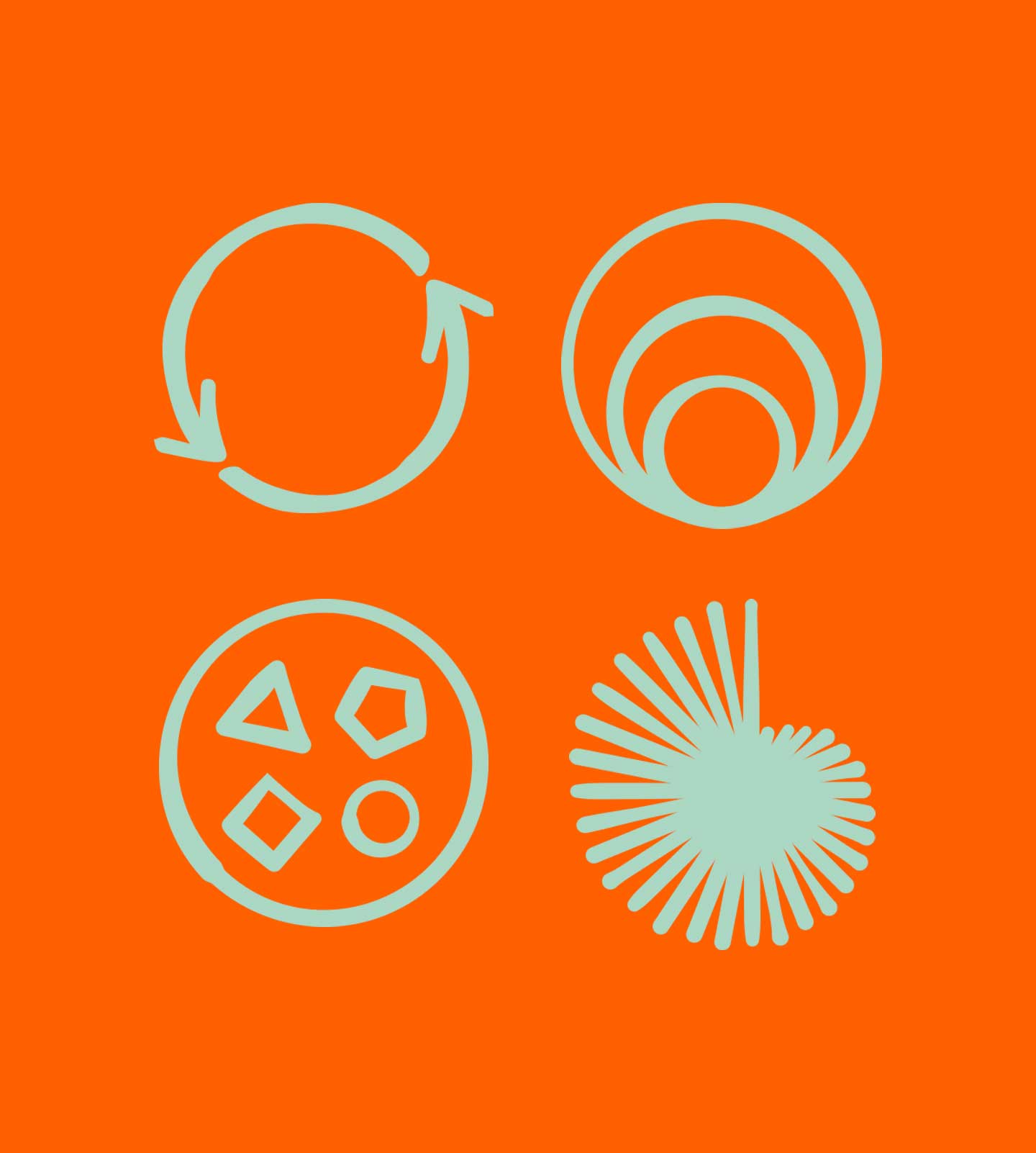 Join us, from November 3rd - 5th 2021, on a three-days long virtual journey, in which we will explore a regenerative future together. 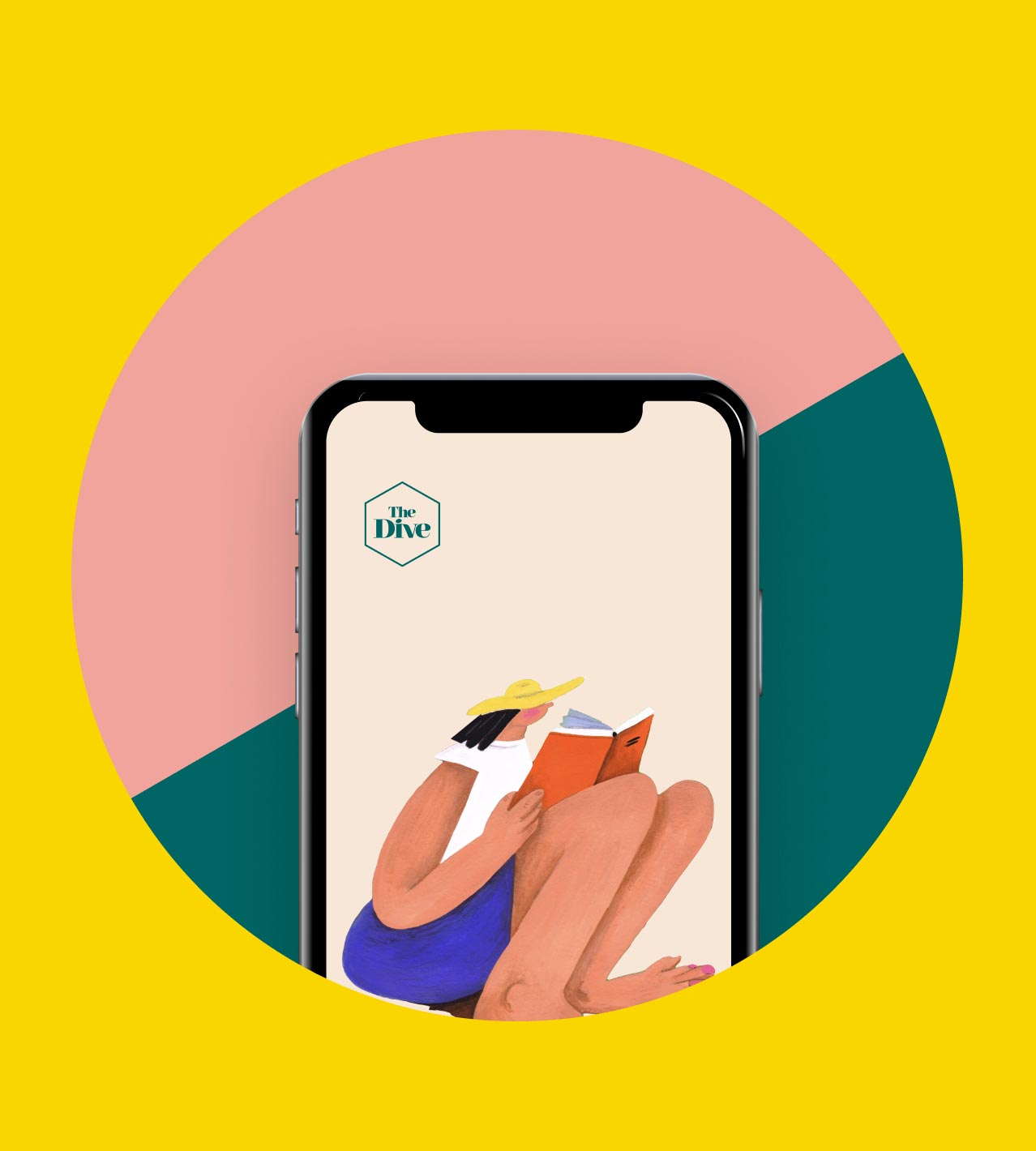